If Gifs/Images are not displaying in Chrome try a different browser.

“Kinematics is a branch of classical mechanics that describes the motion of points, bodies (objects), and systems of bodies (groups of objects) without considering the forces that cause them to move” - wikipedia

Forward kinematics is when you have a chain of controls (ctrls in a hierarchy) eg: A|B|C|D in that when A is moved B C D follow, when B is moved C and D follow and so down the `chain’.

Here are two examples of setting up an FK chain. One using parenting to create the hierarchy and the other using constraints.

I’m using cubes here to clearly show what is going on, but these can be any type of control Curve / transform etc.. 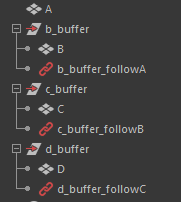 As you can see both of these examples will result in a control rig that will behave in a forward [kinematic] (FK) way.

*Side note: we can then attach joints / clusters etc to the results of these controls to alter the base shape deform the Cube.

Here is a look at that in action, the control curves driving joints that are skinned to the Cube to change the shape of the cube (more on that later).

Another kinematic we use a lot is Inverse Kinematics (IK).